“Pie Jesu” In one of those miracles of life, the sun casts a rosy glow to the jet engine outside my window. It’s a magical moment of peace and movement that passes for stillness as the ethereal Pie Jesu plays in my ears. The sound is pure. The miracles of noise cancelling headphones grant me my own personal space in this incredibly noisy plane. In this space, I can watch the sun’s magic glow. And sadness washes over me.

I’ve crossed the country. Watched the parched land below for hours. When I left California, the cinders from a fire two hours away had turned the sky brown. It’s one of two or more which rage almost out of control. Friends with asthma were trapped at home with air purifiers set to max. Yesterday, I’d risked a quick, unavoidable bike ride to pick up a second car which left me with a runny nose. I’ve escaped the brown skies for a very long trip which will see me travel around the world – and more – in very few days.

Today is the 100th anniversary of the World War I armistice – the latest 11/11/18. Our president is in Europe but acting far from presidential. Our laws feel like they are being subverted – one after the other – in the name of keeping power. The airwaves and news feeds are full of harsh statements accusing the other side of lies or fraud or just plain incompetence. And some people are waking up. They have just started a wave of change to counteract the power and money grab. Many people have realized that if they don’t step up – they may be stepped upon. And just as strongly, other people claim that power makes right.

Some groups in the country now fear the knock on the door. Some folks can’t bring their wives and husbands home as they have done for decades. They have been declared “Other.” Our international agreements helping protect the most vulnerable among us are being twisted until they protect only the most powerful. And if you are hungry, tomorrow will probably only bring even more hunger – even if you work long hours. If you are powerful, tomorrow looks like it will bring you more power – and certainly more money.

And I know, as I have known for the last two years, that if I don’t make those groups declared “Other” feel safe that one day, the knock could come for me. The same as it once came for my grandfather just before his town was liberated. It’s a degrading process watching a beautiful, capable country heading for a crisis of conscience. It’s nasty and it’s cruel and it’s dangerous. I ask myself on this momentous day, after looking back 100 years, have we learned nothing?

If we cannot find our way to get along with each other, the earth will only become hotter, the stakes higher and the societal pain larger until we come to our collective senses. We are all human. We all have worth. Protecting the least powerful and creating shared resources that bring us all up is the goal of government. When it breaks down, then brutality becomes the order of the day. Your safety is the only one that you can create for yourself. Law and order will disappear.

This isn’t hyperbole. I lived in a broken society. One where the haves and have-nots were poles apart. It led to my ex-husband pointing a gun at a man by the side of a road to protect his children. He tried to help and became a victim. A surreal story to be told in another time.

A broken society has a real cost to the country and each and every person. Having looked at that way forward, can we please turn away? Turn toward each other? See each other’s humanity?

“Pie Jesu” The high notes resonate. And in this moment of beauty as the wheels hit the ground, I bow my atheist head and I these words come to me from long lost Catholic services my extended family took me to over many years: 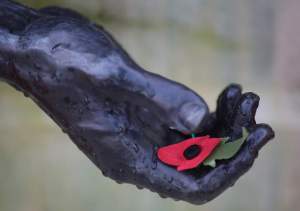 You take away the sins of the world

Have mercy on us

You take away the sins of the world

I love technology and how real humans interact with it. Improving anything, and especially businesses is the space I love to work in. I share a home with three teenagers with varying degrees of US memories who mostly use UK words and live with me in a haze of pubescent angst and hormones.
View all posts by Pamela Schure →
This entry was posted in California Living and tagged airplane, Armistice, California, Catholic, Peace, pie Jesu, politics, power, travel. Bookmark the permalink.